Stanislaus Kostka was born at the castle of Rostkovo (Rostkow) in Poland into a noble and wealthy familyin 1550. He received his early education from a private tutor and then was sent, with his older brother Paul, to the Jesuit college in Vienna where he studied from 1564 to 1567. He endured some bullying from his brother as well some misunderstandings with the tutor who accompanied the two boys. 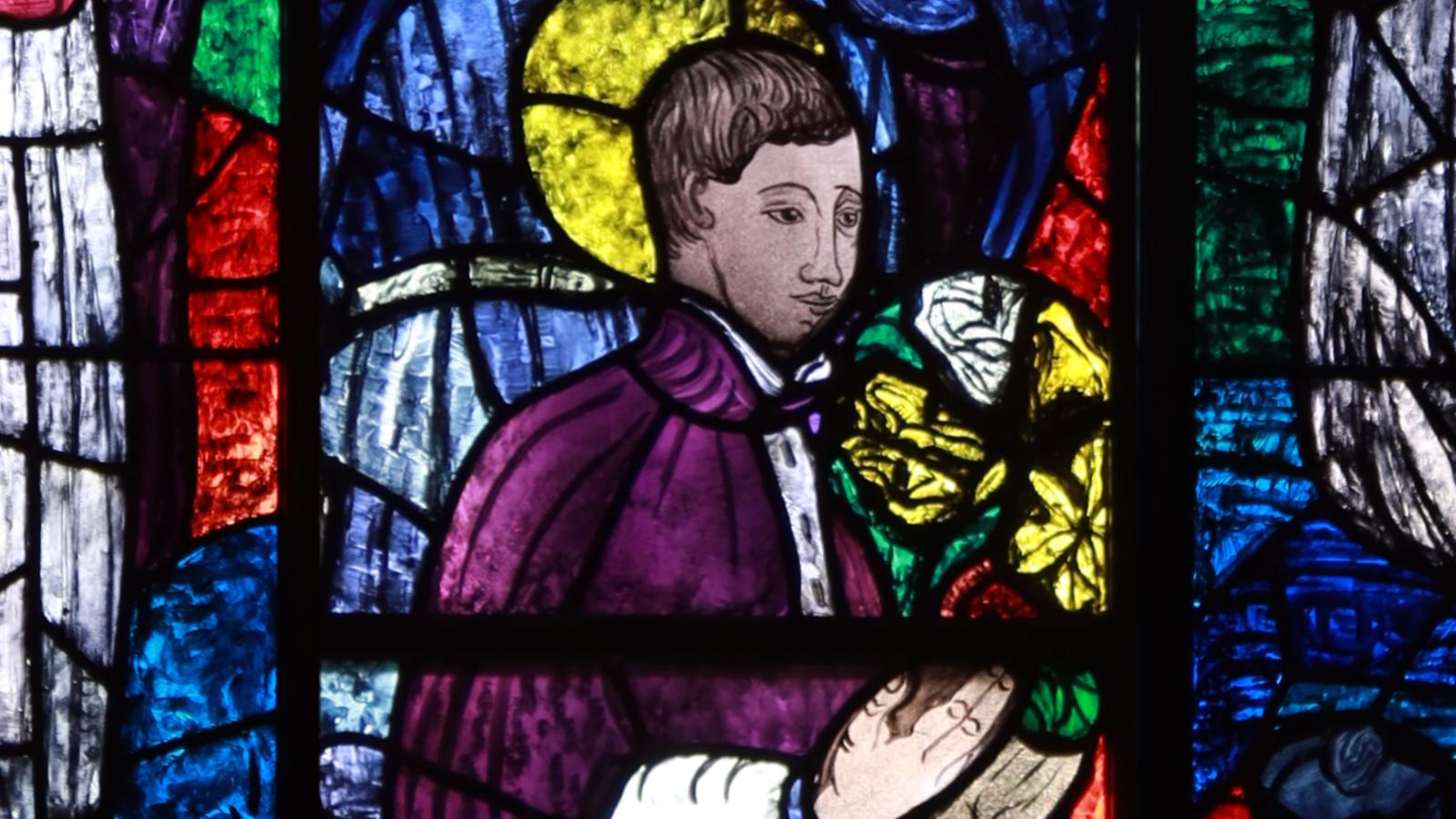 At first, the two boys were boarders in the Jesuit residence at the college but, after seven months, moved to the house of Senator Kimberker. Kimberker was a strict Lutheran who would not allow a Catholic priest into his house. This became an issue when Stanislaus unexpectedly fell ill in mid-December 1565. The boy kept asking for Holy Communion but his brother tried to deter him. Stanislaus prayed to the patron of the sodality to which he belonged, St. Barbara, to intercede with God so he could receive Communion before he died. He then had a mystical experience of Mary visiting him and placing the Christ Child in Stanislaus’ arms. Stanislaus understood this as a sign that he was to enter the Society of Jesus.

When he had recovered, he went to the Jesuit provincial in Vienna asking to join the Order. The provincial was favourable, provided Stanislaus had his parents’ approval, something the young man knew his parents would not give. It was then suggested that Stanislaus go to Augsburg in Germany and ask Peter Canisius, the Provincial there, to accept him. On the morning of 10 August 1567, Stanislaus slipped out of Vienna. He took off his fine clothes and put on the clothes of a poor pilgrim. In this way, he was missed by his angry brother who came looking for him but did not recognise him on the road. Stanislaus walked more than 700 km to Augsburg only to discover that Canisius was in Dillingen, another day’s walk. Canisius, recognising the fine qualities in the young man, agreed to accept him after testing him with some menial work. He also arranged for Stanislaus to join two young Jesuits on their way to Rome. It was felt that Stanislaus would be safer from his family in faraway Rome than in nearby Germany.

In late September, Stanislaus and the two Jesuits set off by foot and arrived in Rome on 25 October 1567, where they made their way to the residence of the superior general, Francis Borgia.

Stanislaus had brought with him a letter from Peter Canisius which said of him: “We hope for great things from him.” Borgia had Stanislaus remain at the Gesu residence in Rome for three months before he went to the Roman College and then to the Sant’ Andrea novitiate. The young man was just 17 years of age. But his novitiate and Jesuit vocation would be short-lived.

In early August 1568 he had a sense that he had not much longer to live. He developed a fever but the brother infirmarian did not think it was serious and that the boy’s fears were unjustified. On 14 August Stanislaus told the infirmarian he would die the next day but again the remark was not taken seriously. Later that day he took a turn for the worse and lost all his strength. He received Viaticum and prayed with the novices and other Jesuits who were by his bedside. About three o’clock on the morning of the feast of our Lady’s Assumption on 15 August, he announced that Mary was approaching with angels to take him to heaven and soon died. He had been a novice for only about 10 months.

During this brief period he showed himself a model religious and was blessed with ecstasy and visions. His elder brother, Paul, who had caused him trouble in the past, himself became a Jesuit but not until he had reached the age of 60. Stanislaus was canonized by Pope Benedict XIII in 1726.

He is remembered for his generosity of heart and, though young in years, for sanctity beyond his years and an iron determination to follow God’s call despite family opposition.
Stanislaus is a popular Polish saint and is also the patron of Jesuit novices.