Evie Hone was born into an established Anglo-Irish family which had previously included distinguished Irish artists; she was a descendant of Joseph Hone, a brother of Nathaniel Hone. At the age of eleven she became partially lame from infantile paralysis. A visit to Assisi in 1911 made a profound impression on her. In 1921, together with her friend Mainie Jellett (1897-1944), she became a pupil of the cubist painter, Albert Gleizes, who had turned increasingly to religion - a core element of Evie's life.

Evie Hone produced some seventy-four windows in the twenty-two years during which she worked in stained glass. Her reputation may rest largely on the expressive intensity of her stained glass output, but she was an artist who closely involved herself in the Irish art scene in a number of ways.

Evie Hone has been described as having two great loves in her life: God and art. Of her fifty stained glass windows, some forty are in Ireland, ten in England and one in Washington D.C. The famous Eton window - an acknowledged masterpiece, of which there is a preparatory sketch in Manresa – was begun in 1949 and installed in 1952. Evie’s personal favourites were the Sermon on the Mount/Beatitudes (in Manresa) and the Ascension, which is in Kingscourt, County Cavan. 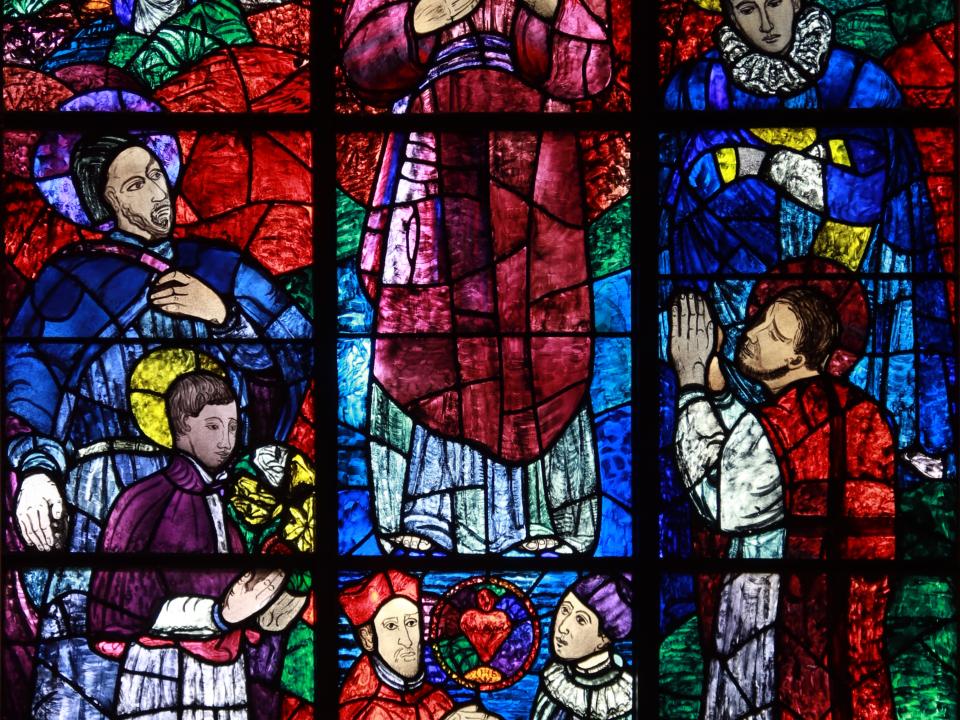 The prayer room is normally accessible to the public from 10.00 am to 1.00 pm and 2.00 pm to 5.00 pm. It may not be available to visitors during some retreats. Enquiry to reception will establish whether it can be visited at a given time.

Evie Hone and Mainie Jellet pioneered modernist art in Ireland, their exploration of religious themes winning more acceptance for the genre than might otherwise have been found. The windows of Evie Hone display her knowledge of European religious art tradition and her modernist skill.

The windows in the Manresa Jesuit Centre of Spirituality prayer room were Evie Hone’s first independent commission, executed in 1945 and 1946. The first windows she worked on depict the Nativity and the Sacred Heart (the windows on the left and right respectively in the current arrangement) and, in 1946, the Sermon on the Mount/Beatitudes, the Last Supper and Pentecost.

The windows were made for the chapel of the Jesuit College, Rahan, Tullamore, County Offaly and, when that building was sold in 1991, they were removed and installed in the purpose-built room in Manresa in 1992.

Evie was a life-long friend of Mainie Jellet, with whom she studied painting in London and, later, in Paris under André Lhote and Albert Gleizes; she was influenced by the works of Georges Rouault among others. Over the years she became more attracted to stained glass and worked with Michael Healy at An Túr Gloine, continuing to do so until it was dissolved in 1944. Evie then set up her own studio in Marlay Grange, Rathfarnham.