Aloysius Gonzaga, born in the castle of Castiglione delle Stiviere, between Brescia and Mantua in northern Italy on 9 March, 1568, came from one of Italy’s most famous families. He was the eldest son of Ferdinando Gonzaga (1544-1586), Marquis of Castiglione and Marta de Santena, daughter of a baron of the Piedmontese Della Rovere family. His father wanted him to be a soldier as the family was constantly involved in local conflicts. His military training started at an early age but he also received an education in languages and other subjects.

At the age of eight he was placed in the court of Grand Duke Francesco de’ Medici in Florence, where he remained for two years, before going on to Mantua. While there he developed a kidney disease which was to trouble him for the rest of his life. During his sickness, not unlike St Ignatius Loyola, he spent time reading lives of saints and praying. He is said to have taken a private vow of chastity at the age of 9. In November 1579, he was sent with his brother to the Duke of Mantua where Aloysius was shocked by the violent and frivolous lifestyle he found there.

In 1580, he returned to Castiglione where Cardinal (later St) Charles Borromeo discovered that Aloysius, already 12 years old, had not yet received his first holy communion and gave it to him on 22 July 1580. After reading about Jesuit missionaries in India, Aloysius had a desire to be a missionary himself and began giving religious knowledge classes to young boys in Castiglione. He also used to visit some religious communities in the Duchy of Montferrat where his family spent their winters and to live a more ascetic lifestyle. 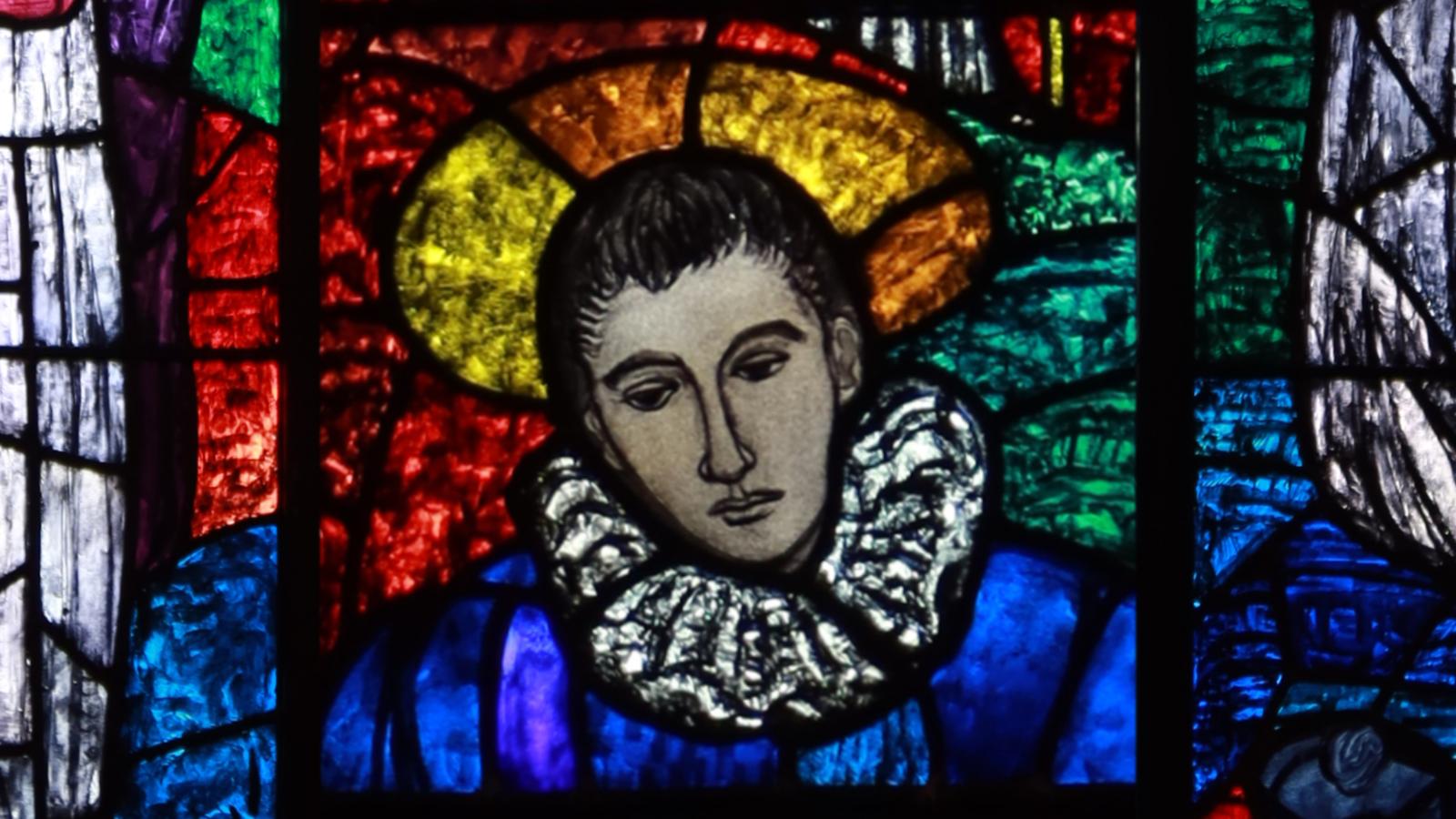 In 1581 the family was called to Spain to serve in the court of Empress Mary of Austria. Aloysius and his brother Ridolfo became pages for the infante Don Diego, Prince of Asturias.

It was while there that he made the resolution of becoming a Jesuit, though he had first thought of joining the Capuchins. His mother agreed to but his father was violently opposed.

The family returned to Italy in 1584. His family were still strongly against him joining the Jesuits and, when they realised he was set on the priesthood, tried to persuade him become a diocesan priest where there would be the likelihood that he could obtain a prestigious bishopric worthy of his rank. If he became a Jesuit, such a future would be ruled out. But Aloysius stood firm. Finally, he was allowed to renounce his heritage in favour of his brother on 2 November 1585. This required the approval of the emperor, as Castiglione was a fief of the empire.

He went to Rome and, because of his noble birth, first had an audience with Pope Sixtus V. On 25 November 1585 he was accepted into the Jesuit Roman novitiate by the superior general, Claudius Acquaviva. He was asked to temper his ascetical ways as it upset his relationship with his fellow novices. His health problems continued. In addition to the kidney disease, he also suffered from a skin disease, chronic headaches and insomnia.

On 25 November 1587 he made his first vows as a Jesuit and, after receiving minor orders, began his theological studies. In 1590 he had a vision in which the Archangel Gabriel told him he had less than a year to live.

In 1591, during his fourth and final year of theology a famine and plague broke out in Italy. The Jesuits opened a hospital for the victims and Aloysius volunteered to work there. In order to protect him, he was only allowed to work in a ward where there were no plague victims. However, a man in his ward was infected and on 3 March 1591 Aloysius showed the first symptoms of the plague. It seemed certain that he would die very soon and he was given the Sacrament of the Sick. However, he recovered but in poorer health. During this time, he often spoke with his confessor, Cardinal Robert Bellarmine. After another vision, he told Bellarmine he would die on the octave of the feast of Corpus Christi. On that day, 21 June, he seemed well in the morning but insisted he would die before the end of the day. Cardinal Bellarmine gave him the last sacraments and recited the prayers for the dying. Aloysius died just before midnight on 21 June 1591. He was 23 years of age.

Aloysius was buried in the Church of the Annunciation in Rome. Just before his death his name was changed to Robert, in memory of his confessor. Later his remains were moved to the Sant’ Ignazio church in Rome, where they now rest in an urn of lapis lazuli in the Lancelotti Chapel. His head was later brought to the basilica bearing his name in Castiglione delle Stiviere.

He was beatified only 14 years after his death by Pope Paul V on 19 October 1605. On 31 December 1726, he was canonised together with a Jesuit novice, Stanislaus Kostka, by Pope Benedict XIII. The same pope declared Aloysius patron of young people in 1729.

In 1926, he was named Patron of Christian youth by Pope Pius XI. He has also been considered a patron of plague victims and, in recent years, this has been extended to victims of AIDS.

In many pictures he is shown as a young man wearing a black cassock and white surplice, or as a page. He holds a lily, indicating his chastity, a cross, indicating his piety and self-sacrifice, a skull, referring to his early death, and a rosary, because of his devotion to the Virgin Mary