Pedro Arrupe was the 28th Superior General of the Society of Jesus. A man of great spiritual depth, he was committed to justice and to the service of the most needy. The architect of the Retreat House Chapel, Andy Devane, was among those present when he addressed a congregation in Gonzaga Chapel - which he had also designed. He wrote of the event, “It was a marvellous and moving ceremony and I thought that Fr Arrupe’s words were so truthful and so inspiring. It was such a privilege to be present...”

In a ceremony at which Desmond Cardinal Connell presided, the Retreat House chapel was named the Pedro Arrupe Chapel in 2007, in memory of the Jesuit Superior General, the centenary of whose birth was then being observed.

A New Chapel and Retreat House

The retreat house chapel was part of development and building undertaken in the mid-sixties. The architect Andrew Devane designed and oversaw the building of the new retreat house and chapel.

Completed in September 1967, the chapel is one of Andy Devane’s many works of liturgical or religious interest in which sensitivity to and awareness of the work of liturgy is evident. His correspondence about the chapel and notes on its construction convey confident understanding of personal and corporate spirituality and professional architectural discipline. 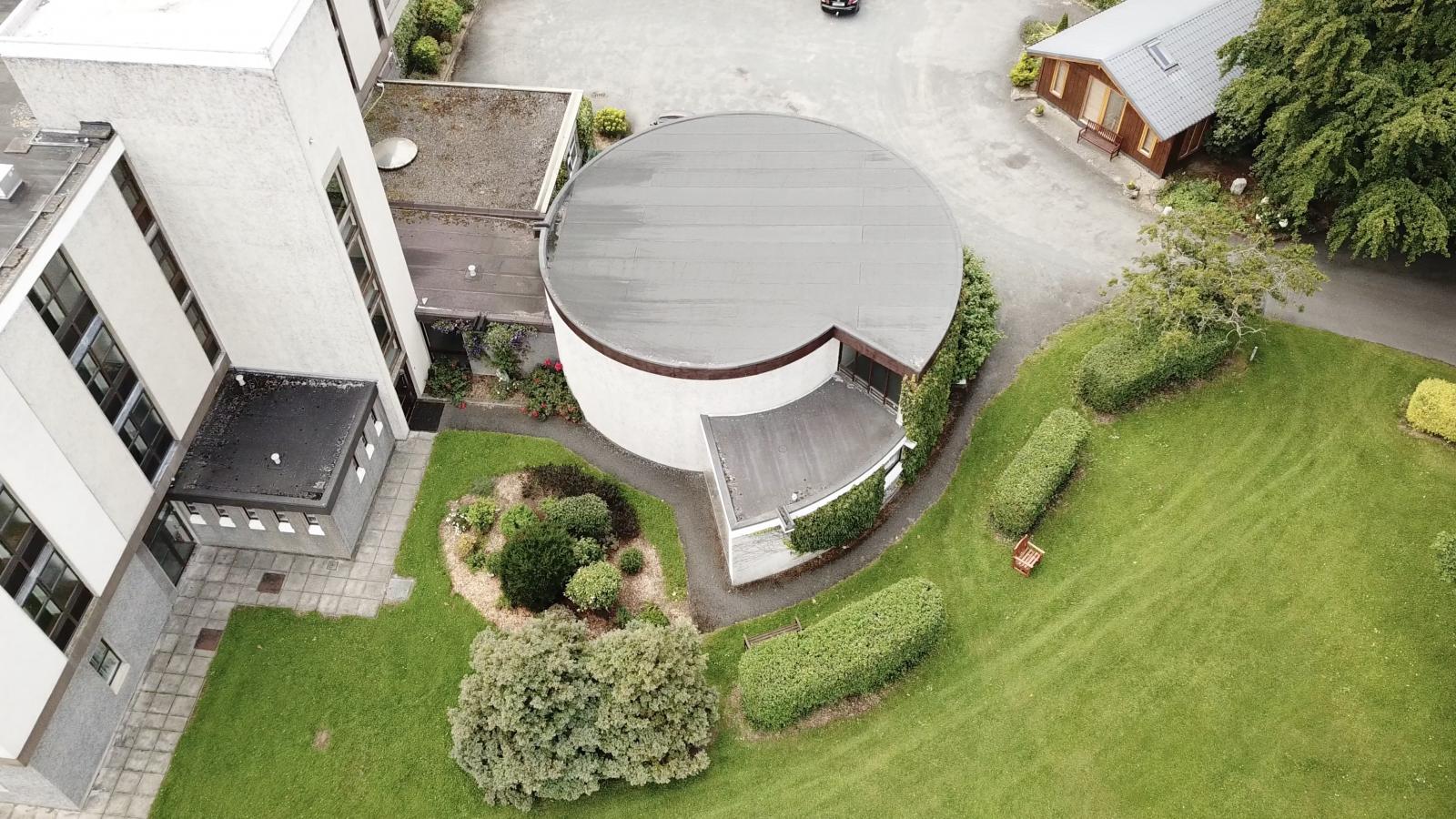 The elliptical form of the chapel

I imagined it as a little Domus Dei – a place for his simple glory and worship – for a small number of specially collected faithful – where mass is celebrated – as the climax of all worship, devotion and teaching therein. I thought of it as a humble and simple place – for communal and personal prayer to the Blessed Sacrament, and as a place (where more than is usual in most chapels) the love and word of God is taught by each retreat master to each retreatant who will voluntarily assemble here in all the years to come. 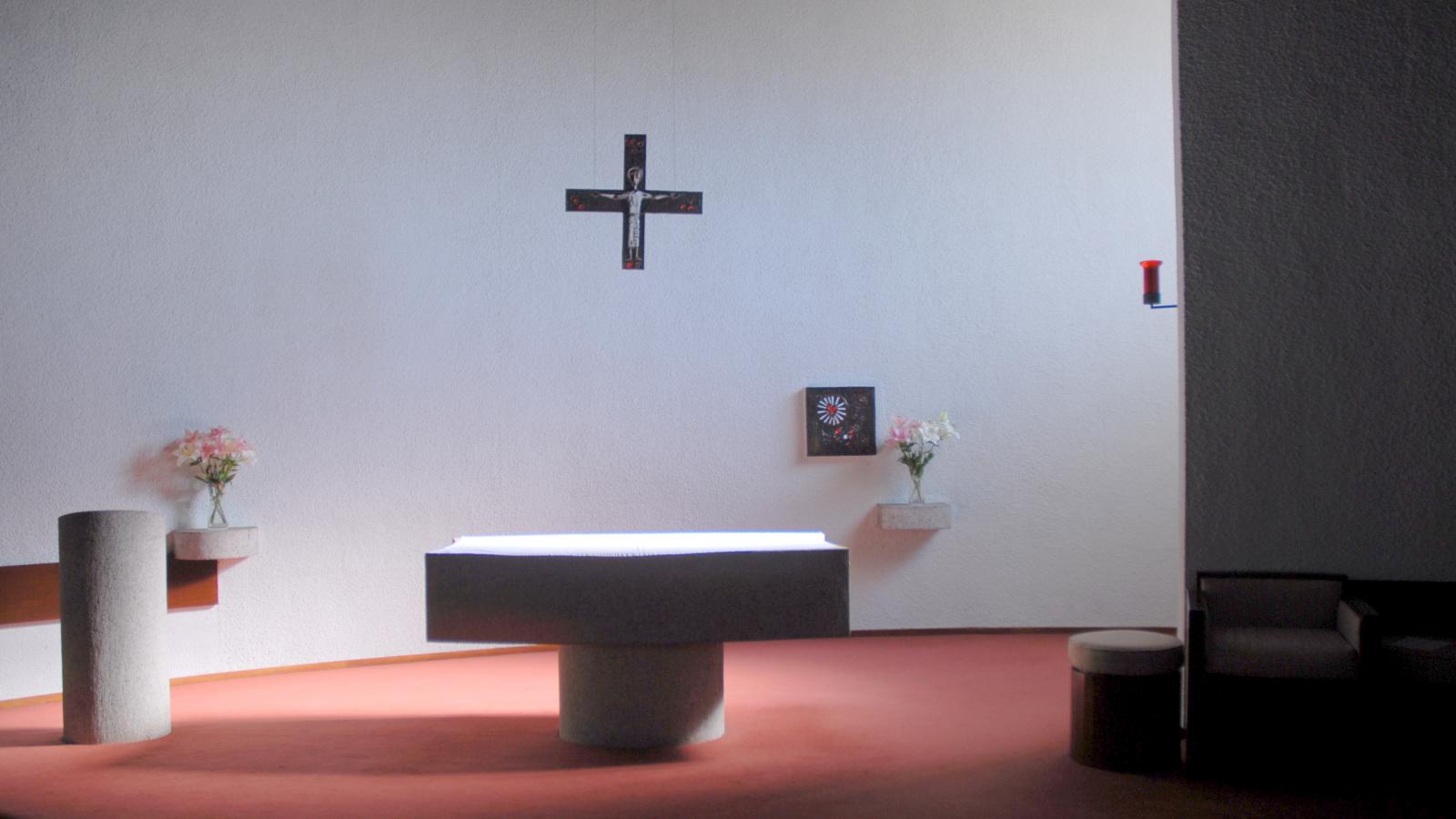 ...the chapel is based on a spiral - like a part section through a shell. The mouth of the shell is the chancel...light floods from the East, washing along the curving rear wall of the chancel, and finally grading off into the more dimly lit nave

Renewed study in many areas of church life informed the Second Vatican Council (convened by Pope John XXIII in 1962, concluding in 1965). The renewal was particularly evident to the public in their experience of scripture, catechetics and liturgy, as new expressions were given to traditional and established forms. Appreciation grew of the rôle of buildings as contributors to the liturgy rather than as mere devotional spaces and some Irish architects brought their professional skills into dialogue with the emerging principles. Andy Devane’s church architecture is significant in this regard, his chapel in Manresa representing a small crafted essay in the expression of conciliar liturgical principles as he gave form to the prayer of a particular community.

The placement of the tabernacle came to be of critical importance to Andy Devane. The Archbishop of Dublin, John Charles McQuaid, monitored the design of all new church buildings  and objected to the proposed  placement of the tabernacle in Manresa. Devane argued against a central placing, insisting that the spiral design of the building called for a more creative response, offering a detailed rationale and explanation of his thinking.

As you will see the plans the chapel is based on a spiral - like a part section through a shell. The mouth of the shell is the chancel, defined by space and by light which floods (through the shell mouth) from the East,  washing (over the tabernacle first of all)  along the curving rear wall of the chancel, and finally grading off into the more dimly lit nave

You will notice that the spiral is formed from three separate centres (A, B, + C on the plan). The altar is on the axis and is plane to centre A. If one tries to put the tabernacle also on this access (and fix it into the back wall) it becomes evident that it cannot be kept on the same plane as the altar and owing to the spiralling wall surface it looks askew in this position – as it is.

Furthermore the distance between altar and tabernacle shelf (centrally placed) is reduced making the ceremonial space between them very small. but most important of all objections to the "central position" is the fact that instead of emphasising the importance of the tabernacle, this arrangement actually denigrated in every way – its presence, position, balance, lighting – everything.

This can be seen on the enclosed plan (where the centrally positioned (but askew) tabernacle – coloured yellow) but it cannot be visualised on the enclosed section 10 – 10 – where coloured yellow – the tabernacle appears – in fact quite falsely – to be in the more important position.
If on the other hand one examines on plan the original position proposed for the Tabernacle (coloured red) it is evident that it (the tabernacle) is the axes of both the spiral centres B & C and is on the plane of their intersecting radii – in fact in this position (and here only) the tabernacle is on the plane of the spiral wall as well as the plane of all three centres, A, B & C.

This particular position gives the maximum prominence and importance to the tabernacle in all respects – spatially, visually, ceremonially – and in relation to day and artificial lighting.

The off-centre shelf for the ciborium emphasises the balance of the tabernacle, gives more ceremonial space around the altar, and eliminates the real difficulty inherent in the central shelf – the danger of catching the ciboria in vestment or sleeve when opening the tabernacle door.